STP is vital for detecting loops within a switched network. Spanning tree works by designating a common reference point(the root bridge) and systematically building a loop-free tree from the root to all other bridges. All redundant paths remain blocked unless a designated link fails. The following criteria are used by each spanning tree node to select a path to the root bridge:

We can manually configure the priority of a switch and its individual interfaces to influence path selection. The values given below are defaults.

So where do these configured STP priorities come into play? There is no BPDU field for priority; instead, both bridge and port IDs have their administratively configured priorities embedded in them. Note the Bridge Identifier and Port Identifier fields in this Wireshark capture of a PVST+ BPDU: 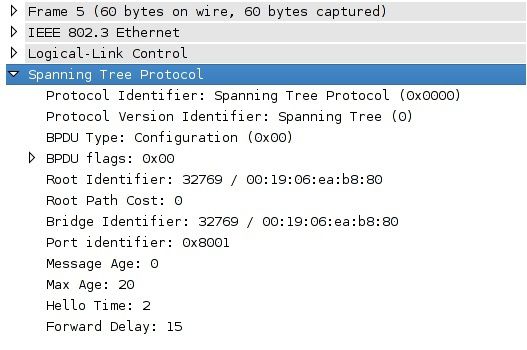 Although the bridge ID field has been conveniently split into a bridge priority and MAC address for us by Wireshark's protocol descriptor, it is actually a single eight-byte value. The following field, which contains the port ID unique to each interface, is similarly composed at one-fourth the size.

Because this switch is running PVST+, the VLAN ID (1) is added to the configured bridge priority of 32768 (the default priority) for a sum of 32769. The unique bridge ID, taken from a MAC address, is appended to this value to form the complete bridge ID. Similarly, the port ID is formed by prepending the 4-bit port priority (the default value of 128, or 0x80) to the interface ID, which happens to be 0x001 because we are connected to the first physical switchport. These two values form the complete port ID of 0x8001.