Network Protocols, Govern the Communications between Computers on a Network

What is a Network Protocol?

A protocol is a set of rules that governs the communications between computers on a network. These rules include guidelines that regulate the following characteristics of a network: access method, allowed physical topologies, types of cabling, and speed of data transfer.

The most common network protocols are:

The follow is some common-used network symbols to draw different kinds of network protocols. 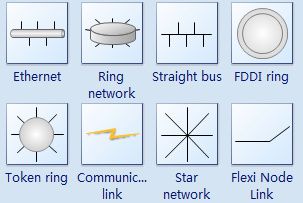 The Ethernet protocol is by far the most widely used. Ethernet uses an access method called CSMA/CD (Carrier Sense Multiple Access/Collision Detection). This is a system where each computer listens to the cable before sending anything through the network. If the network is clear, the computer will transmit. If some other node is already transmitting on the cable, the computer will wait and try again when the line is clear. Sometimes, two computers attempt to transmit at the same instant. When this happens a collision occurs. Each computer then backs off and waits a random amount of time before attempting to retransmit. With this access method, it is normal to have collisions. However, the delay caused by collisions and retransmitting is very small and does not normally affect the speed of transmission on the network.

The Ethernet protocol allows for linear bus, star, or tree topologies. Data can be transmitted over wireless access points, twisted pair, coaxial, or fiber optic cable at a speed of 10 Mbps up to 1000 Mbps.

To allow for an increased speed of transmission, the Ethernet protocol has developed a new standard that supports 100 Mbps. This is commonly called Fast Ethernet. Fast Ethernet requires the use of different, more expensive network concentrators/hubs and network interface cards. In addition, category 5 twisted pair or fiber optic cable is necessary. Fast Ethernet is becoming common in schools that have been recently wired.

Local Talk is a network protocol that was developed by Apple Computer, Inc. for Macintosh computers. The method used by Local Talk is called CSMA/CA (Carrier Sense Multiple Access with Collision Avoidance). It is similar to CSMA/CD except that a computer signals its intent to transmit before it actually does so. Local Talk adapters and special twisted pair cable can be used to connect a series of computers through the serial port. The Macintosh operating system allows the establishment of a peer-to-peer network without the need for additional software. With the addition of the server version of AppleShare software, a client/server network can be established.

The Local Talk protocol allows for linear bus, star, or tree topologies using twisted pair cable. A primary disadvantage of Local Talk is speed. Its speed of transmission is only 230 Kbps.

The Token Ring protocol was developed by IBM in the mid-1980s. The access method used involves token-passing. In Token Ring, the computers are connected so that the signal travels around the network from one computer to another in a logical ring. A single electronic token moves around the ring from one computer to the next. If a computer does not have information to transmit, it simply passes the token on to the next workstation. If a computer wishes to transmit and receives an empty token, it attaches data to the token. The token then proceeds around the ring until it comes to the computer for which the data is meant. At this point, the data is captured by the receiving computer. The Token Ring protocol requires a star-wired ring using twisted pair or fiber optic cable. It can operate at transmission speeds of 4 Mbps or 16 Mbps. Due to the increasing popularity of Ethernet, the use of Token Ring in school environments has decreased.

Fiber Distributed Data Interface (FDDI) is a network protocol that is used primarily to interconnect two or more local area networks, often over large distances. The access method used by FDDI involves token-passing. FDDI uses a dual ring physical topology. Transmission normally occurs on one of the rings; however, if a break occurs, the system keeps information moving by automatically using portions of the second ring to create a new complete ring. A major advantage of FDDI is speed. It operates over fiber optic cable at 100 Mbps.

Asynchronous Transfer Mode (ATM) is a network protocol that transmits data at a speed of 155 Mbps and higher. ATM works by transmitting all data in small packets of a fixed size; whereas, other protocols transfer variable length packets. ATM supports a variety of media such as video, CD-quality audio, and imaging. ATM employs a star topology, which can work with fiber optic as well as twisted pair cable.

ATM is most often used to interconnect two or more local area networks. It is also frequently used by Internet Service Providers to utilize high-speed access to the Internet for their clients. As ATM technology becomes more cost-effective, it will provide another solution for constructing faster local area networks.

The most recent development in the Ethernet standard is a protocol that has a transmission speed of 1 Gbps. Gigabit Ethernet is primarily used for backbones on a network at this time. In the future, it will probably be used for workstation and server connections also. It can be used with both fiber optic cabling and copper. The 1000BaseTX, the copper cable used for Gigabit Ethernet, is expected to become the formal standard in 1999.

More Cisco news and info of Cisco hardware you can visit  http://blog.router-switch.com/ to see more...