Designed for small and medium-sized networks, the1850 Series delivers the performance you need for the ongoing proliferation of Wave 2 (the latest Wi-Fi technology you should try) as well as support for older Wi-Fi devices.

With 802.11ac Wave 2, the Aironet 1850 Series provides a data rate of up to 1.7 Gbps on the 5-GHz radio, more than triple the rates offered by today’s high-end 802.11n access points. It also enables a total aggregate dual-radio data rate of 2.0 Gbps, providing the necessary foundation for enterprise and service provider networks to stay ahead of the performance and bandwidth expectations and needs of their wireless users. LiFi vs. WiFi-Basic Difference between LiFi and WiFi

In the last article, we told what Li-Fi is and what LiFi system basics are. It seems a cool technology in network communication? Compared to today’s popular Wi-Fi, can you tell some difference between them? In this article we list some main differences between LiFi and WiFi. Which one is better? Let’s check.

• The figure-1 depicts Li-Fi internet network architecture. As shown in the figure there are two major components in Li-Fi internet viz. LED Lamp and Li-Fi Dongle.

• As shown lamp driver is connected with internet on one end and with LED lamps on the other end. Streaming content from internet are pushed to the LED lamps through Lamp driver software.

• LED lamps are placed at different locations as per requirement in the office or home premises for multiple users.

• Li-Fi dongle is used in order to use Li-Fi internet services by various users. As shown Person#1 is browsing internet in Laptop, Person#2 in tablet and Person#3 in smartphone.

• As shown LiFi dongle is composed of photodetector, amplification & processing and applications for different types of data.

• All the LED lamps can be swithed on and off using a power button switch provided.

• As shown in the figure there are two major components in WiFi internet viz. WiFi router and WiFi dongle or WiFi Stations.

• WiFi router works on multiple bands (e.g. 2.4 or 4.9 or 5 GHz) as per requirement. It converts internet data packets into wifi compliant signals at above bands. WiFi works on IEEE 802.11 standards.

• These EM waves are received by WiFi dongles or Stations connected with IP compliant devices. Hence WiFi internet is used by various clients as shown in the figure-2.

In the following table we will list the basic difference between LiFi and WiFi technologies. Lifi is not the replacement of wifi technology. It can be considered as incredible companion of the wifi technology. It operates between 380 nm to 780 nm optical range. LiFi is used to exchange data incredibly rapidly and securely at much lower power level compare to WiFi.

There are various li-fi products such as lamps, Kits, LiFi smartphone etc. The vendors and OEMs of LiFi products are also mentioned.

Following are the popular LiFi products and their leading vendors.

Do you hear of Li-Fi? Maybe you are familiar with Wi-Fi in today’s network world, but you may not know much about the new Li-Fi. LiFi is the short form of "Light Fidelity". It works on the principle of Visible Light Communication (i.e. VLC). The network is also referred as VPAN or VLC Personal Area Network. The VLC transmits data by intensity modulation. It uses LEDs and Laser diodes (or photo detectors) at transmit and receive ends respectively. It works in 380 nm to 780 nm optical band which is visible light and hence the name VLC.

The VLC standard or VPAN standard defines three classes of devices viz. infrastructure, mobile and vehicle. These devices operate in one of the three topologies mentioned below. The different device has different coverage range, data rate and other requirements.

It works in three modes as mentioned above in the figure above. In star topology, communication is established between central controller (i.e. coordinator) and devices. In peer to peer topology, one of the devices should become coordinator at the time of establishing association.

Each device or coordinator has unique 64 bit address. Device can use 16 bit address also upon request at the time of establishing association with coordinator. 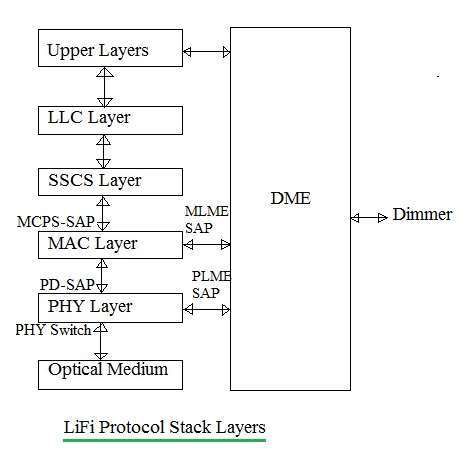 Physical layer houses light transceiver. PHY switch housed in PHY layer interfaces with optical SAP which connects it to the optical medium. The optical medium composed of one or multiple optical sources or optical detectors (e.g. laser diodes or photodiodes).

DME (Device Management Entity) is also supported by LiFi or VPAN network architecture. It makes interfacing between dimmer and PHY/MAC a reality.

There are three types of physical layer configurations supported in VLC or LiFi System Viz. PHY-I, PHY-II, PHY-III. Different rates can be achieved in different configurations. They can be used indoor or outdoor.
Refer LiFI PHYSICAL LAYER➤.

Applications of LiFi or VLC system There are many applications of LiFi or VLC system as lighting and data communications. Typical among them are lighting, signboards, street lights, vehicles and traffic signals or lights. The figure mentions emerging application of LiFi for internet data communication. It has also become popular due to wide adoption of IoT based technologies.
READ MORE➤.

Following are the benefits of LiFi system:

• It transfers data securely as it can be used in Line of Sight mode of optical signal. It does not pierce through the walls and hence it cannot be easily intruded by hackers.

• It uses much low power for transmission compare to other systems such as WiFi.

What do the Audiences say about the new Li-Fi?

Lifi is nowhere near to become Wifi's alternative. There a huge difference between their working hence, application areas. Wifi is a lot more flexible to use than Lifi. It can be used parallel with wifi but there's no way it will replace wifi completely.

Here are some facts to support my upper statement. No matter how fast or secure Lifi is, there are still few drawbacks and limitations that may stop it from becoming a true alternative to existing wifi. Let me write a few-

1. Range and Line of Sight: This one is pretty common. Lifi requires a direct line of sight to work efficiently; your signal can be interrupted by almost any obstacle lying between you and your lifi source. Light can't pass through walls, hence, your signal is restricted to the room only; where the light can't reach. If you move out of sight of LED, you lose connectivity.

2. Cost: As I already told above, you need to be strictly in direct sight of LED to use it efficiently, meaning you may need at least one device for each of your sitting places in your house. And you also need an individual lifi receiver for each of your device that you want to use the internet on. Plus the fact that you may need to rewire your house too as the lifi LED will need ethernet wire to produce work. The cost is going to be way more than normal Wifi.

Comcast already use Wi-Fi with speeds over 2GBps, faster than the one you are talking. But, but, I belive that I read that Li-Fi is able to get over 200 GBps, so I think you need to update your information about this matter.

If 1Gbps is 100 times faster than your WiFi, that implies a slow10 Mbps WiFi.

I just transferred, via WiFi, a 3.909 GB rar file from my desktop to my laptop. That took 961 seconds ... which means I got about 32.5 Mbps *REAL* transfer rate. The modem/router from my ISP is about 2 years old and my laptop and desktop are both about 3 years old: might the file transfer have gone faster with newer/better hardware?

More reviews you can read here:

More topics related to internet you can read here: http://blog.router-switch.com/category/internet-2/