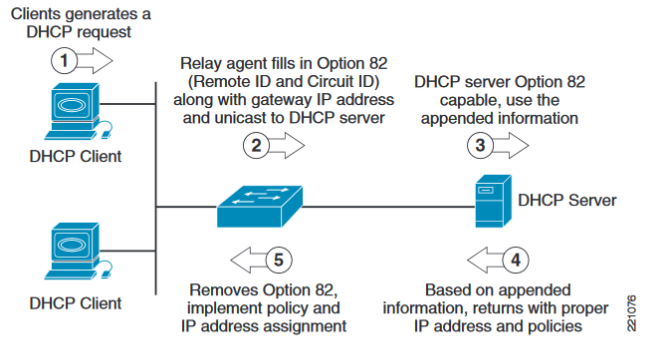 DHCP is short for Dynamic Host Configuration Protocol. We know that DHCP is used in LAN environments to dynamically assign host IP addresses from a centralized server, which reduces the overhead of administrating IP addresses.

I’ve read an article “DHCP Snooping and DHCP Snooping Configuration” that is about a CCIE’s experience. In that article it also shares the DHCP Option 82 concept.

In this article we will share some info of using the DHCP Option 82.

DHCP also helps conserve limited IP address space because IP addresses no longer need to be permanently assigned to client devices; only those client devices that are connected to the network require IP addresses. The DHCP relay agent information feature (option 82) enables the DHCP relay agent (Catalyst switch) to include information about itself and the attached client when forwarding

DHCP requests from a DHCP client to a DHCP server. This basically extends the standard DHCP process by tagging the request with the information regarding the location of the requestor. (See the Figure “DHCP Option 82 Operation”)

The following are key elements required to support the DHCP option 82 feature:

1. The DHCP option 82 feature is supported only when DHCP snooping is globally enabled and on the VLANs to which subscriber devices using this feature are assigned.

2. DHCP and the DHCP option 82 feature have not been validated in the lab for EttF version 1.1. At this time, Cisco recommends considering only DHCP with option 82 for the application servers at level 3.

Five Things You Should Know About DHCP Snooping

How to Configure DHCP Snooping

How to Configure DHCP Snooping in a Cisco Catalyst Switch